MvC are pleased to announce that TRISTAN MACKAY will be gracing the MvC Stage onm Friday 10th April 2015 at the GRand Hotel, Hartlepool.

Tristan was born in Tiverton, Devon.

He first picked up a guitar at the age of 14 after hearing the Eric Clapton ‘Unplugged’ album. This started his life long love for blues guitar music and the storytelling songs of Dylan, Young and Springsteen.

In 2001 he moved to Yorkshire to study at Leeds university.  During his student days he would busk to pay the bills and it was to this pursuit he returned after university to promote his music.

He self recorded and released his first two E.P’s ‘Tales from a bedroom orchestra’ and ‘Live from the lounge’. Although these were only produced and sold from his bedroom studio, his track ‘The Wine and Me’  was featured in the Channel 4 show ‘Skins’.

Another of the songs from his first E.P. ‘Be all that you can be’ was featured by Aled Jones on ‘Good morning Sunday’ and was used by World Duty Free as their summer Campaign song in all their stores through 2011.

While busking full time, Tristan was discovered on myspace by Grammy award winning producer Martin Levan (John Martyn, Andrew Lloyd Webber) who invited him to his studio to lay down demos.

In 2010 they embarked on a collaberation to produce Tristan’s debut album ‘Out Along the Wire’. With a team of outstanding musicians, including Pete Van Hooke (Mike and the Mechanics, Van Morrision) and friend John Garden (Scissor Sisters) as well as a cameo organ performance from Paul Carrack, the album of all original tracks was released 20th Feb 2012.

The album went straight to No 1 on the I-tunes blues chart in the UK and Australia and received a swathe of 4 and 5 star reviews. It was also record of the week on several UK radio stations including BBC Somerset and BBC Devon. 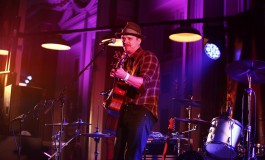